Radio observations provide a new view on galaxies. Whereas optical images show predominantly the visible light from stars, the radio waves unravel two constituents of galaxies that are invisible to optical telescopes: electrons, almost as fast as light, and magnetic fields. Their role for the stability and evolution of galaxies is increasingly under discussion.

The electrons are “cosmic ray” particles produced in the shock fronts of giant supernova explosions. Magnetic fields are generated by dynamo processes driven by gas motions. When the electrons spiral around the magnetic field lines, radio waves are emitted, a process called synchrotron emission. Its intensity increases with the number and energy of the electrons and with magnetic field strength.

For many decades, radio astronomy has been unable to explore low frequencies below 300 MHz because the ionosphere (similar to scintillation of starlight) distorts the propagation of low-frequency radio waves (which are completely blocked below about 10 MHz). Sophisticated methods of data processing and superfast computers are needed to recover the emission. Due to these technical challenges, spiral galaxies have hardly been studied before at these very low radio frequencies. The only observations were of poor resolution and no details could be made out. 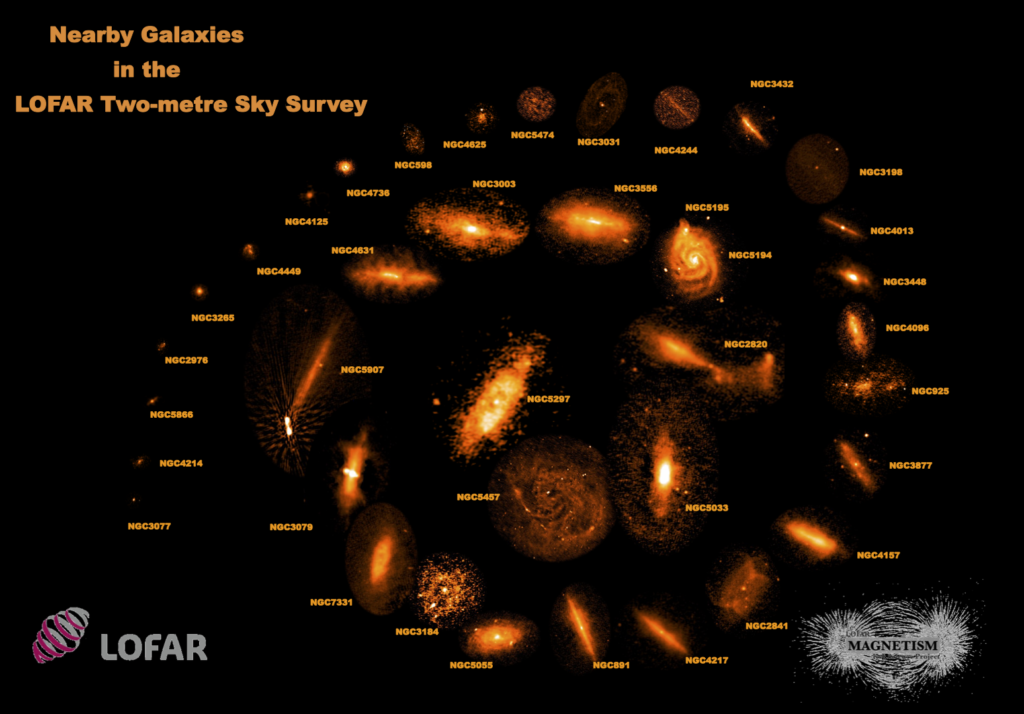 A gallery of nearby galaxies as imaged by the LOFAR Two-metre Sky Survey (LoTSS; Shimwell et al. 2017), which are presented and discussed by Heesen et al (2022). 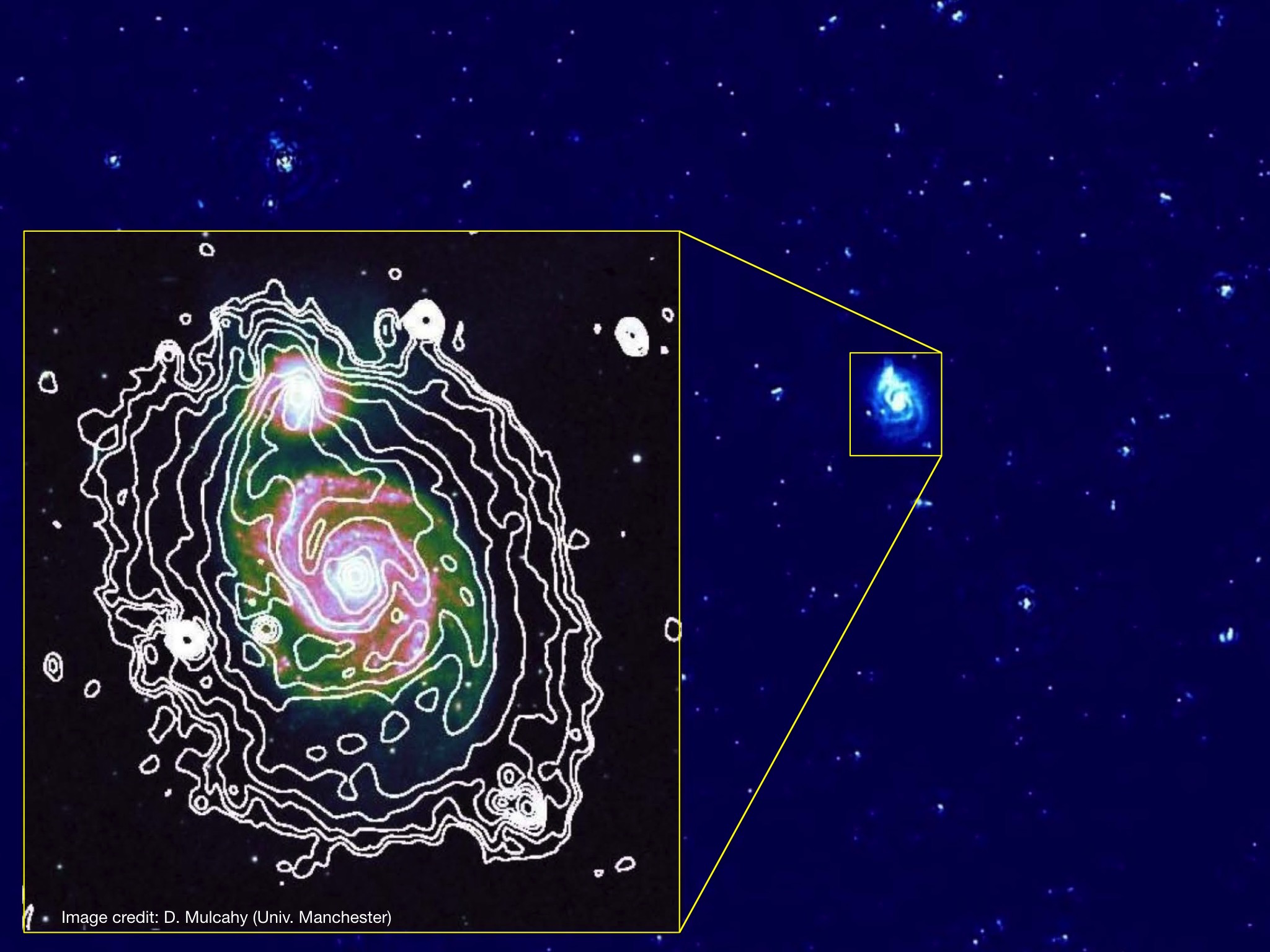 The Whirlpool galaxy and its surroundings: LOFAR radio map of the Whirlpool galaxy M51 and its neighbourhood at a frequency of 150 MHz. The field covers 4 by 2.6 degrees, the observations were performed with the Dutch LOFAR high-band antennas. The map shows the distribution of relativistic electrons in M51 and also a large number of background galaxies. The inset shows an enlarged view of M51 in the frequency range 115 – 175 MHz (white contour lines) overlayed onto an optical image of M51 from the Digital Sky Survey (DSS). For more details, see Mulcahy et al., 2014,A&A, 568, A74.

NGC 5775 as seen by LOFAR (orange colours) and optical SDSS (false-colour). This edge-on galaxy has a substantial star formation rate and an impressive radio halo that extends more than 10 kpc above the star forming disk. Our LOFAR data are complemented by new broadband multifrequency VLA data (from the CHANG-ES survey); collectively they will allow strong constraints to be placed on the cosmic ray propagation into and through the disk-halo interface, and perhaps to the boundary with the intergalactic medium. 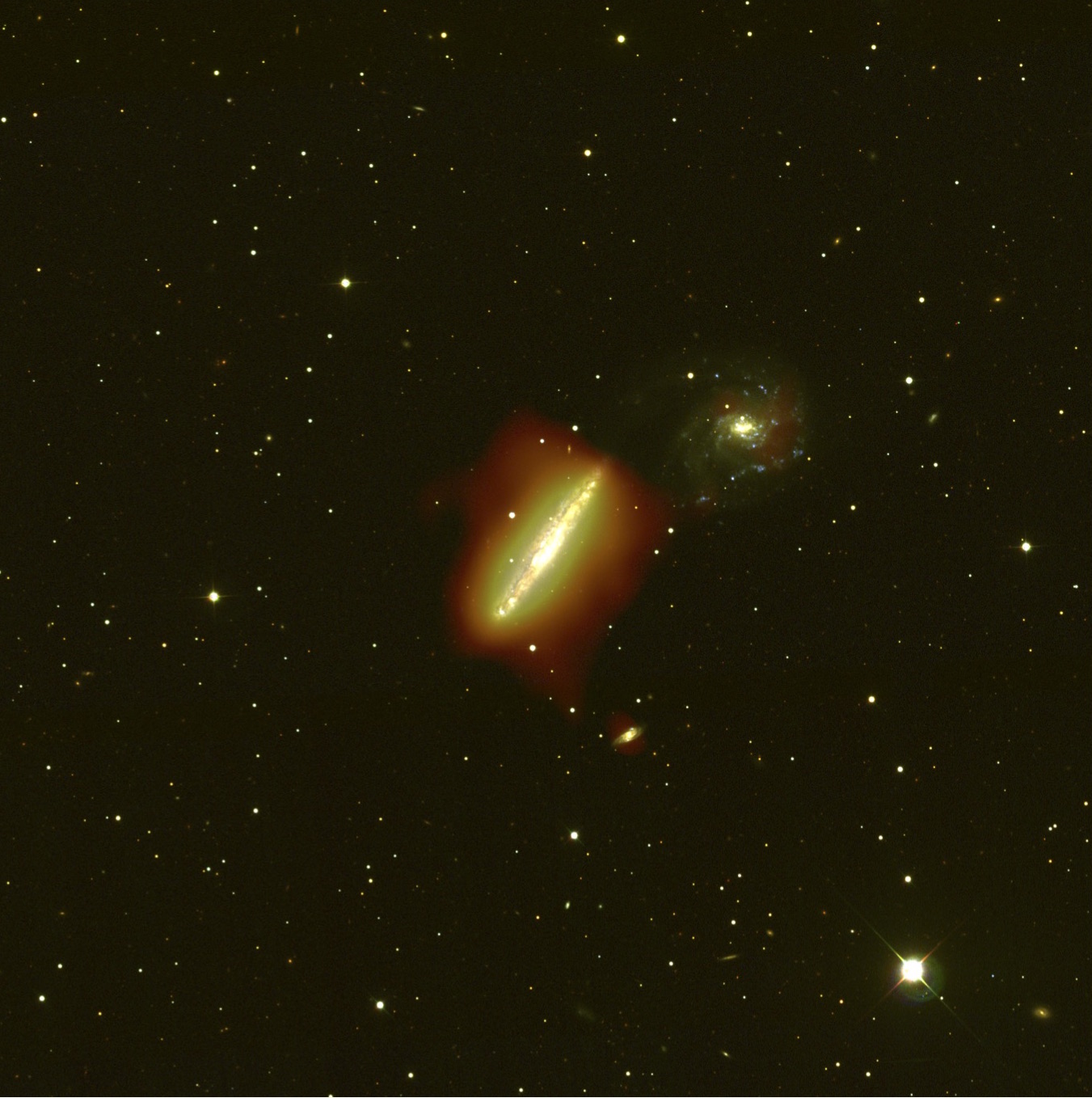 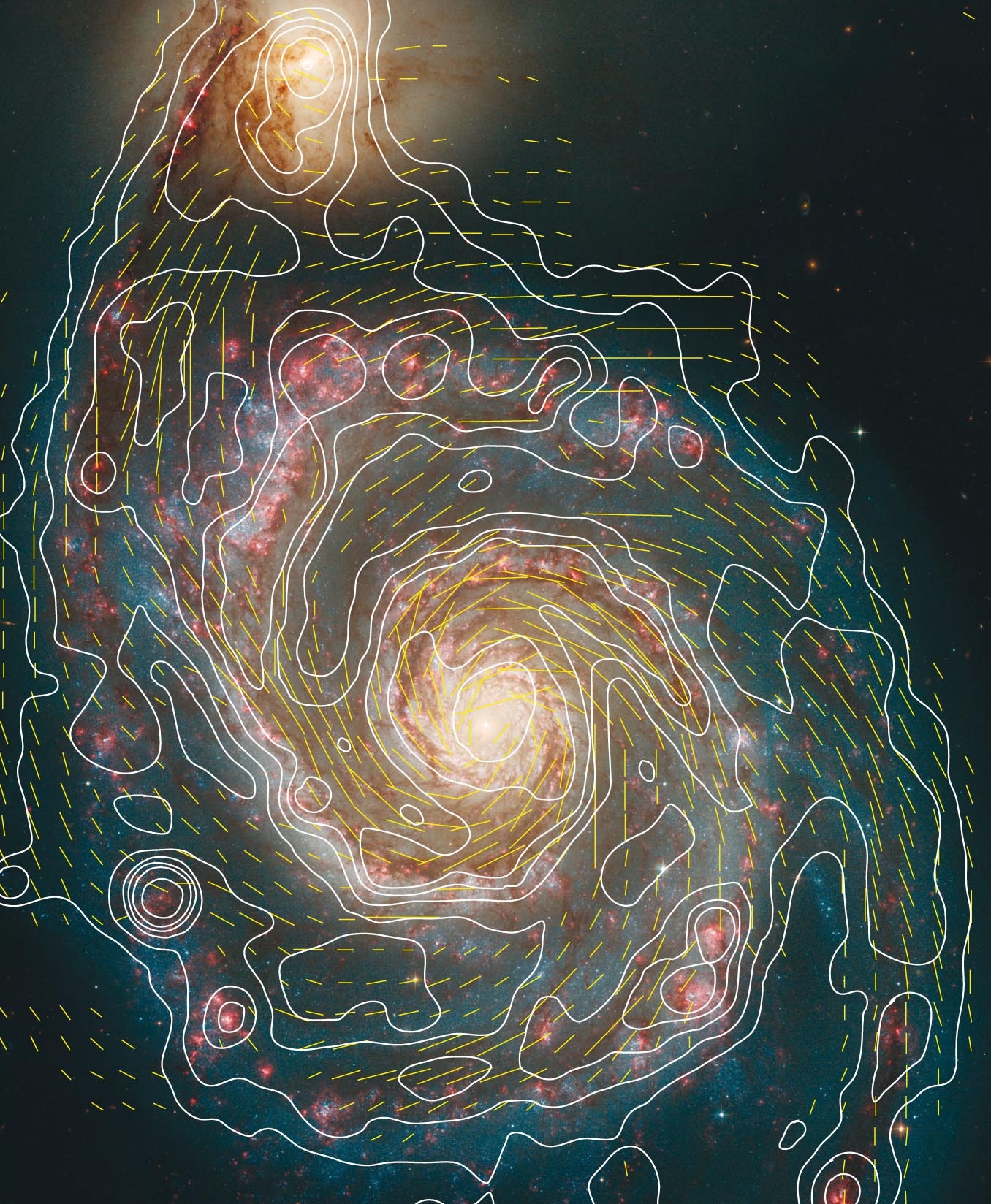 This figure was derived from combined observations of the prototypical spiral galaxy M51 with the interferometric radio telescope Very Large Array (VLA) near Socorro (New Mexico/USA) and with the 100m single-dish radio telescope near Effelsberg (Germany). The contour lines trace the total radio emission at 4.8 GHz(6 cm wavelength) and the vectors the polarized emission. The vectors indicate that the orientation of the regular magnetic field is spiral and mostly follows the spiral arms, as evident from the background optical image obtained by the Hubble Space Telescope. The magnetic field is strong also between the spiral arms.This was not expected from the idea that the spiral arms are density waves where gas and magnetic fields should be compressed. Instead, the magnetic field must be enhanced between the spiral arms by some other mechanism which is still not understood. Outside of the optical extent of the galaxy, little radio synchrotron emission is detected at high frequencies because the relativistic electrons, responsible for the radio emission and”illuminating” the magnetic field, cannot travel far away from the regions of their origin, supernova remnants. These are embedded into the inner disk of galaxies where the star formation rate is highest. Only in a few cases, radio halos were detected around galaxies seen edge-on. 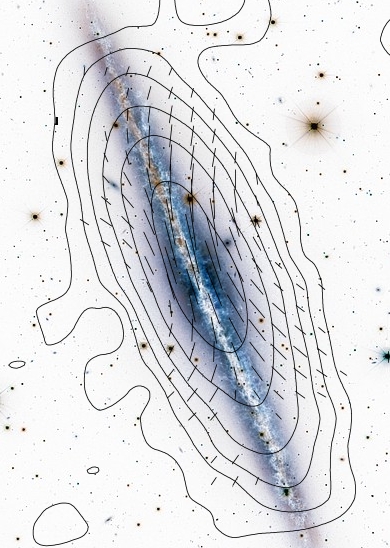 This figure shows the spiral galaxy NGC 891, seen almost edge-on, which is believed to be very similar to our Milky Way. It was observed at 8.4 GHz(3.6 cm wavelength) with the Effelsberg 100m telescope. The background optical image is from the CFHT Observatory. The “X-shaped” structure of the magnetic fields indicates the action of a galactic wind. The observed extent of the radio halo is limited by the large energy losses of the cosmic-ray electrons emitting at this wavelength. At lower frequencies (longer wavelengths) the radio waves are emitted by electrons with lower energies, for which the energy losses are smaller,so that larger radio halos are expected. 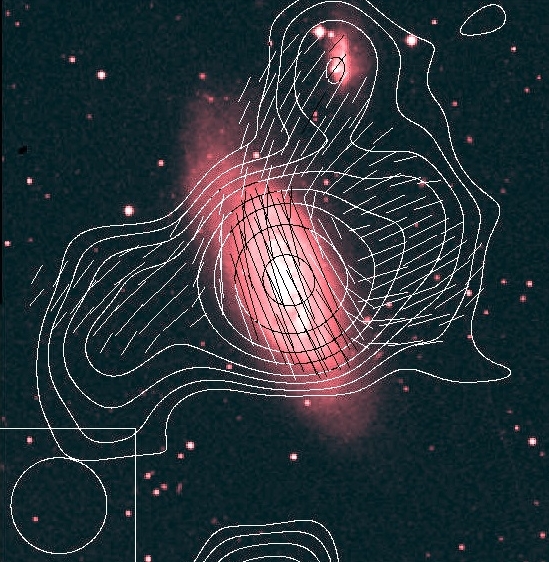 In a few spectacular cases the radio synchrotron emission at high frequencies is not restricted to the optical extent. This is always related to interactions between galaxies. For example, huge radio lobes were discovered on two sides of the galaxy NGC 4569 which is located in the dense Virgo cluster of galaxies where interactions are frequent. This figure shows the radio map observed at 4.8 GHz (6 cm wavelength)with the Effelsberg 100m telescope. Many more cases of interaction tails and lobes are expected at lower frequencies. 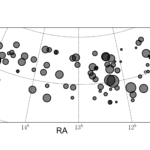 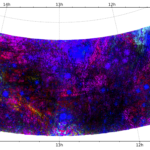 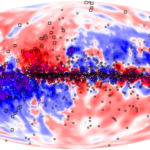 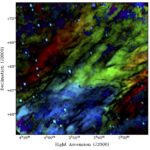 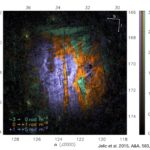